Start a Wiki
Adam Evans otherwise known as the bang baby Rubberband Man, is an ally of Static and the younger brother of Ebon. 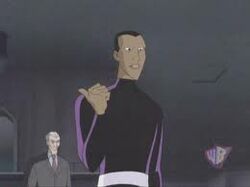 Adam appears to have short black hair as opposed to his brother Ivan who has his hair tied in three braids to make him almost bald.

As Rubberband Man during first and second season, he was seen wearing a skin tight violet catsuit with a white belt to his waist and white shoes. He also wears a matching head mask with five white streaks on his head. In the fourth season, his catsuit is now the same color as his brother Ivan in his shadow form which is black in purple hue and maintains his white belt and boots and he is not wearing a head mask.

Before the Big Bang, Adam was always in the mix of trouble, which was in no small part thanks to his older brother Ivan. Changing from a criminal, he adjusted to dealing with his dyslexia to save the city. Now normal, he dates Vigil's sister Sharon.

Retrieved from "https://staticshock.fandom.com/wiki/Rubberband_Man?oldid=4775"
Community content is available under CC-BY-SA unless otherwise noted.